I suddenly realized this morning that I hadn’t completed the series of articles on the restoration of my Volvo 1800S. I’d published a post on the Before pictures, and one on the In-the-middle pictures, but I’d neglected to finish it all off.

So last time we left the car in the middle of its respray, so now it’s time to take a look at what resulted. I have four photos of the final result and a couple that were taken after the restored car had been delivered.

The first photo shows the front of the car. Interesting things for me are that the headlights work (they didn’t when I got the car for some reason), and that uber-awful VOLVO plate that was a complete bugger to get off. You can’t quite see them from this angle, but they put on chrome wire wheels instead of the original steel hub-capped ones. More on those in a moment. 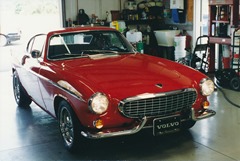 Next up is a view of the car from the rear showing the next awful thing they’d done: put on a “boy racer” mega-exhaust pipe. Yuk. More on that in a moment. 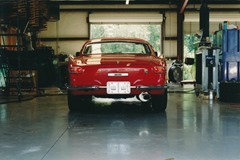 The third and fourth photos are of the interior, featuring the dash. Nothing too out of place here, except the remote key on the key ring. They’d put in a third-party remote unlocking system on the doors, one that, by the time I took possession of the car, no longer worked on one of the doors. More on that in yet another moment. 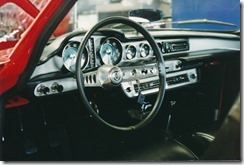 Actually, thinking about it, there’s another interesting thing to note here and that is the fact the interior is now black. Originally the car was white with a red interior, so part of this restoration was the complete replacement of the interior, all panels, all seating.

A better perspective on the wire wheels is this one, taken after the car was delivered from the body shop (photo copyright volvo1800pictures.com) and note the date on the image: 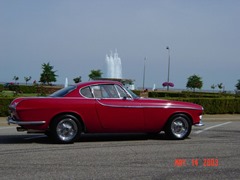 Finally, here’s what the car looked like the day it was delivered to me in July 2010, a photo that I now use as a slider image on the main page here. Again note the exhaust and the wire wheels:

Within a year or so of ownership, I’d replaced the exhaust to the more normal twin-tipped exhaust, and replaced the wire wheels with Panasports, saving 20lbs per wheel in weight. Those wire wheels were heavy, and without them 64SAINT is much nippier and much faster at accelerating. (Funny note: someone actually bought them from me off of Craigslist.) At some point, I had the remote door locking system ripped out too, thank heavens. And overall it looks much better now.

Despite it being 11 years now since the restoration, 64SAINT is still looking as if it were all done yesterday. I put that down to it being always garaged, carnauba-waxed a couple of times per year, and being generally well-looked after; the dry air here in Colorado can’t but help too. I hesitate to say “I never drive it in the rain” because I’ve been caught every now and then by a sudden shower, but certainly not in a hail or snow storm.