Previously, I’d shown and commented on the pictures of my Volvo 1800S, 64SAINT, before the restoration was started in 2003. In this post, I’ll show the pictures I was given when I bought the car that show it in mid-restoration. There are four such photos.

From the first photo, you can see the car was  stripped of everything. The engine is out, all the chrome has been detached, and the glass is removed. Obviously the doors and hood have been taken away to be sprayed separately.

The next photo shows more clearly that all the interior has been stripped out. There are no seats and the paneling has gone too. 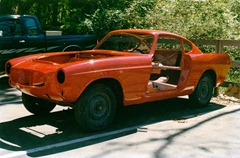 The third photo shows that the dash has been removed too. In this picture you can see some of the original white paint. 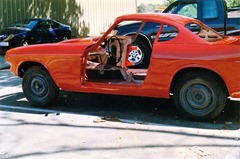 The final photo shows that they removed the trunk lid too, and did a pretty thorough job of spraying the interior of the trunk. I’ll note that they didn’t remove, flush, or refurbish the fuel tank (it’s the floor of the trunk), which is a bit of a shame because I don’t know what it’s like inside. These Volvo 1800S’s are prone to getting water in the tank (the filler flap is horizontal on the left rear and unless you are really careful the water drainage can get blocked with leaves, etc. – this happened to me with my previous 1800S in the middle of London) and so it would have been nice to pull it out. 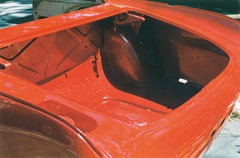 Next time I’ll show the car after it had been reassembled.