As noted elsewhere on this site, 64SAINT was originally Volvo color code #79 or Pearl White. Ten years ago this year, in 2003, the original owner (I’m guessing since the plate you’ll see was registered to him) decided to have it completely restored; an almost 40th birthday present. As part of the papers and documentation I got with the car were some photographs of the restoration: before, during, and after.

I was given four “befores”, and here they are. The first photo shows the owner (? – he looks old enough, I think) getting out of the car: 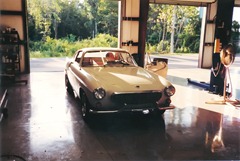 Notice that the wheels in this next photo are already not the original Volvo ones: 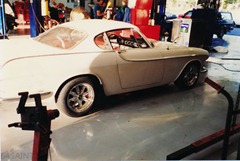 In the next photo, you can see that the exhaust was a proper Volvo P1800 exhaust with the S-shaped kink to the right: 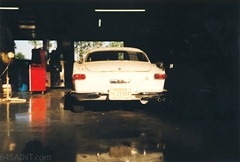 This photo of the original interior shows that the dash had the holes for a two-button radio, but not occupied: The third photo also shows the number plate. It’s an Alabama “antique vehicle” tag, only available if the car was over 25 years old. The owner purchased it on January 13, 1989 as shown in my scan of the registration: 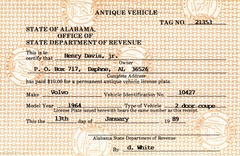 (Note that the VIN entered there matches the chassis number of 64SAINT. This is really the same car!) Next time, we’ll look at the photos taken during the restoration.