I think it’s time to check out the identification plate for my Volvo 1800S; it is the unique designation for 64SAINT. Here it is in all its glory, from just under the hood on the driver’s side: 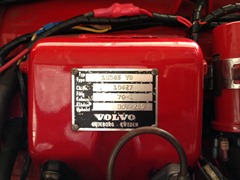 What can we tell from this collection of numbers and codes?

Type: 18345 VD. The type number has all sorts of embedded information. The first three digits (183) indicate that it’s a Volvo 1800S. The fourth digit (4) indicates it was made for the US market (‘3’ would mean non-US). The fifth digit (5) indicates that it was a later model for the year and was built with the M41 gearbox (cars made earlier in the model year used the M40 gearbox). In essence, the M41 gearbox was modified from the M40 to “drive a Laycock de Normanville electrically-actuated hydraulic OverDrive unit” – and so it does: I have a little switch on the dash that engages it; it’s like having a fifth gear. The ‘V’ means left-hand drive and the ‘D’ indicates that it was built in the 1964 model year. [Production information]

Colour: 79-1. This is the first hint that the car, when renovated in 2003, did not keep its original color. The “79” part indicates Pearl White, whereas the “-1” indicates a slightly lighter hue. As you can see in the photos, though, 64SAINT is red. [Volvo Car Paint Codes]

Upholstery:  307-265. Since we already know that the paint color is white and Volvo generally provided red interiors for white P1800s, this should indicate red, which it does. 64SAINT, though, has black seats and door panels: the owner at the time *really* wanted a different looking car. [Upholstery P1800]

Although the car’s appearance changed dramatically when it was renovated (and I’ll post pictures of the renovation later), the owner of the time kept it pretty standard: the red Volvos of the period generally had black seats.

You’ll note that the plate is screwed on and might be thinking that it could have come from a completely different car. Sneaky! Well, luckily, the chassis and type numbers are replicated elsewhere: they are stamped into the metal on another part of the firewall. Unfortunately, with the amount of paint on them, I found I just couldn’t get a good shot to show them: this is about as good as I could get: 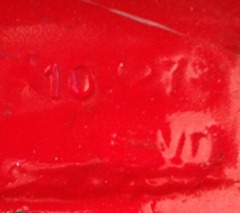 The 10427 is just about legible if you squint at the ‘4’, the VD is very visible, but the 18345 is practically impossible to read: there are just hints to the shape of the characters and my photo does not bring them out at all.