Testing out a photoshoot location

I took 64SAINT out for a drive this lunch hour to stretch its legs (as it were) after some three weeks without being used, to fill it up, and to fetch something from the vets. Since they shut for lunch, it was late when I took the trip, so the sun was starting to go down by the time I got to Panera.

There’s a section of the Shops at Briargate that’s little used and I’ve often thought about what the car would look like photographed there. The reason is that the shopping area is set into the side of the hill so there’s this massive block wall holding back the earth. They’ve planted some shrubbery (says he, not knowing what the plants are) in troughs in the wall as the blocks are stepped back as the wall gets higher. Since I was there and the sun was shining fit to bust, I thought I’d snap a couple of shots with the iPhone to see if it works for a grander photoshoot with a real camera and everything. 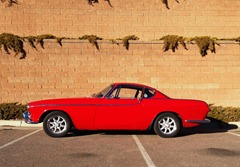 And then a portrait orientation shot, showing more of the wall: 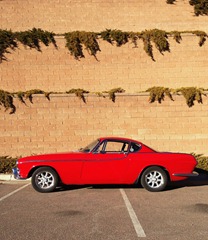 You can certainly see that the sun is setting – the shadows are long and the rays' color suits the car. I think it’s worth trying for a better and proper shoot around 11am or noon, so the sun isn’t reddening so much. Of course, the plants look anemic too since they haven’t had much water over the winter.