It probably goes without saying that since I own a Volvo 1800S I also collect the old dealer brochures from the 60s that extol its virtues. Of course they’re great for the marketing spiel, pictures, and technical details of the car, but also for the most fabulous 60s fashion and hair dos. Absolutely amazing, very trendy.

Here’s one I’ve had for a while. I actually have two copies, one very clean but with a dealer stamp, the other a little yellowed. It’s a 4 pager, full color, Letter-sized, folded in the center.

The first page then: 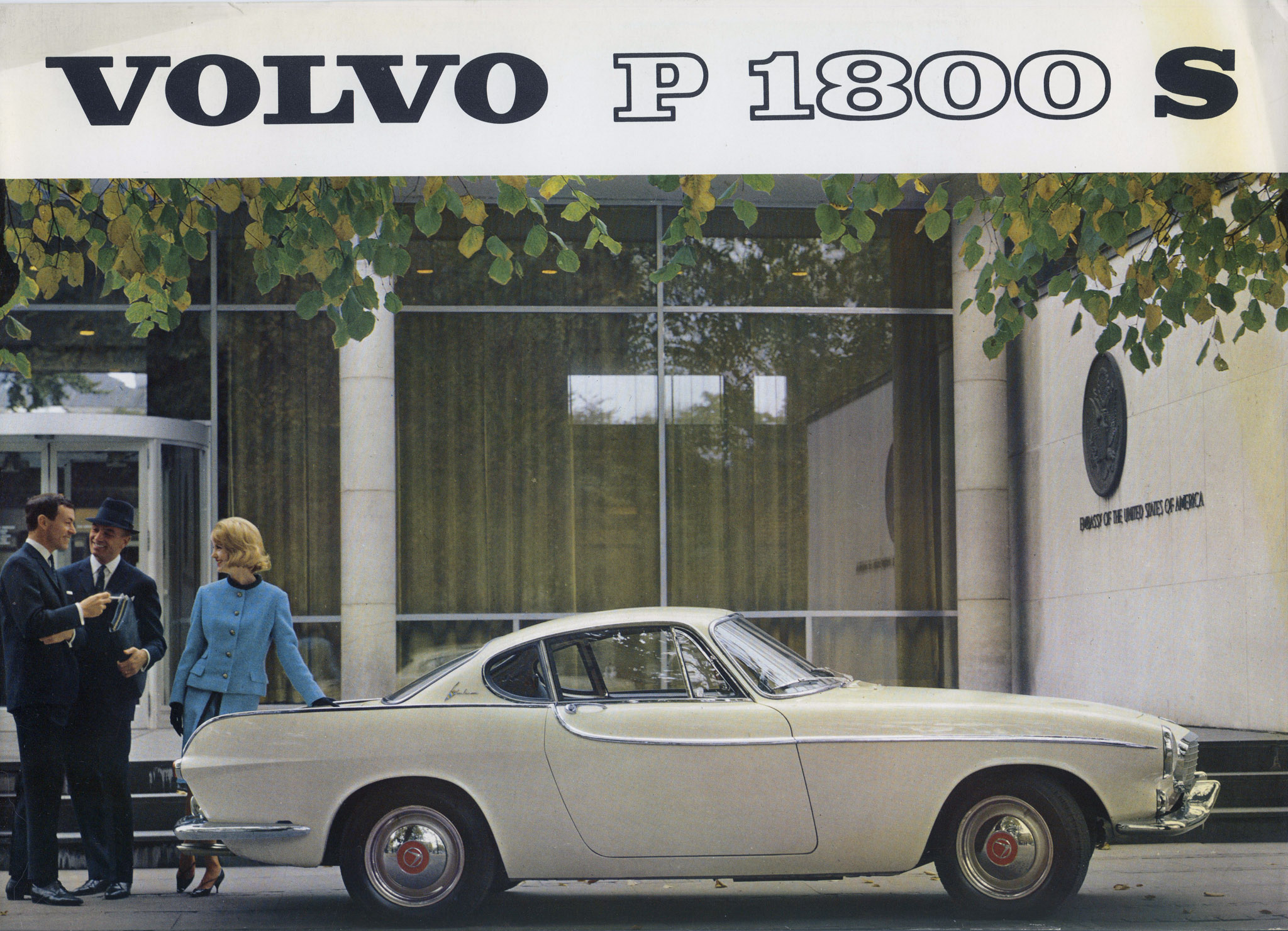 The photo shows a very early version of the 1800S and is actually a Jensen-built car. The main clues are the red inserts in the wheel hubcaps, and the flash on the C pillar. Nevertheless, the brochure is for a P1800S, which were built by Volvo at their main plant in Göteborg, Sweden. Originally Volvo contracted Jensen to build the P1800 in West Bromwich, England, but they did a pretty crappy job on them. After two years Volvo moved production to Sweden to tighten up quality. This was the point that they added the S to the name (for “Swedish-built, essentially) to make it the Volvo 1800S. They also made other minor changes as well, including removing the C-pillar flash and the red hubcap inserts.

The photo is taken right outside the Embassy of the United States of America. To be honest I've no idea which one – it’s certainly not the current Embassy in Stockholm, for example – but it's certainly very, very pre-9/11.  A great 60s haircut for the woman (I remember my Mum used to have one like that), and what looks to be a Dior outfit to go with it. The men, one with cigarette in hand, the other wearing a Homberg, wearing very snappy black suits, straight leg (a little off the shoe in that 60s way), pocket-kerchiefs. We are seeing some very trendy people to go with this very trendy car. 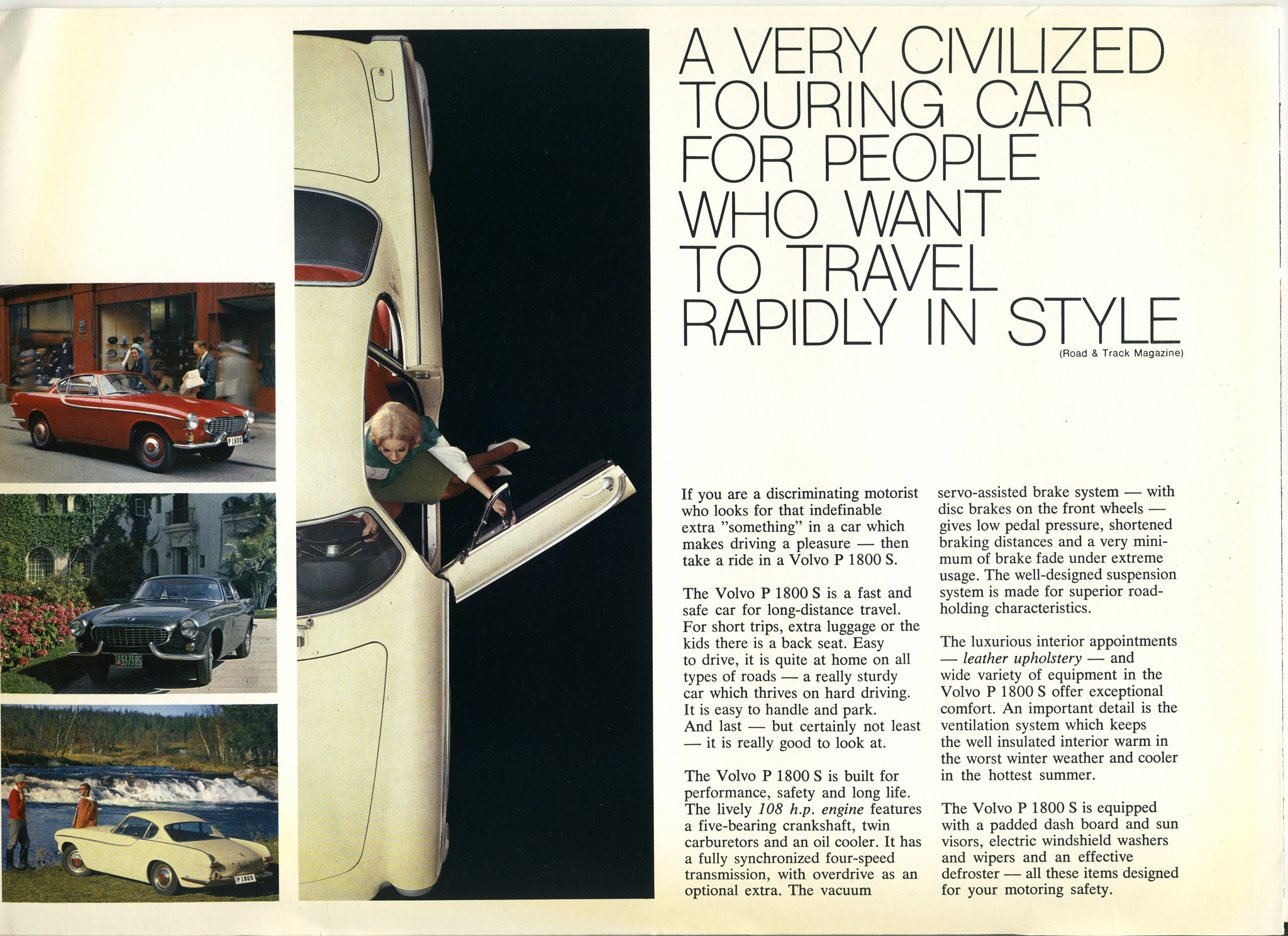 Some nice shots showing the various colors available for the car, red, black, and white. Only one with a real number plate, but I don't recognize the format. The bottom one shows a couple of reflectors above the rear bumper; I don't remember the year they were phased out. (By the way the guy leaning on the car in that picture has some red- lensed sunglasses on, nice). Again, they’re all Jensen-built cars. One day, I must try and take a photo of 64SAINT from above like the main photo on the page. 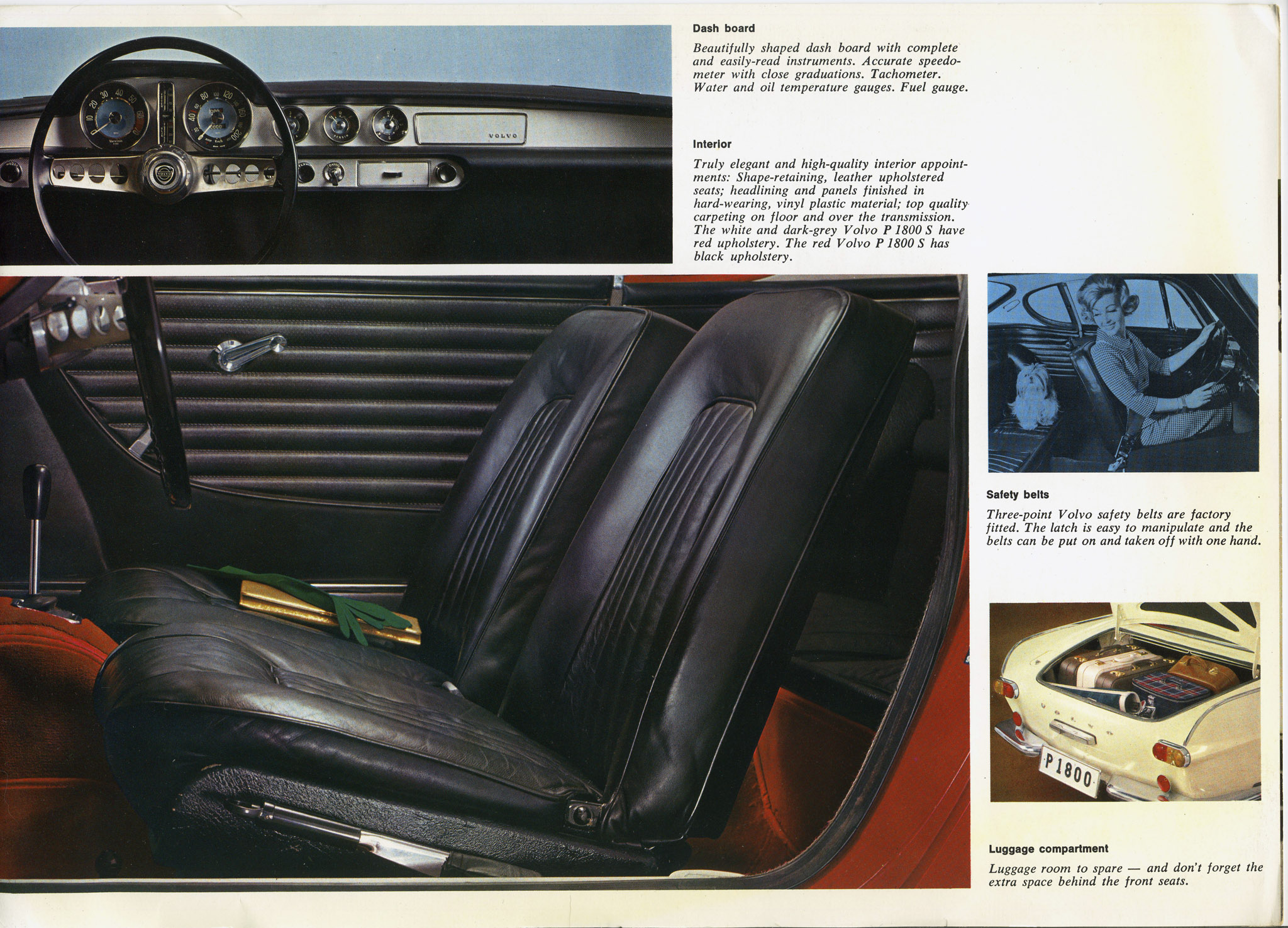 This page is all about the interior, and features those modern "three point Volvo safety belts" that "can be put on and taken off with one hand". Volvo safety, in other words. And featuring a dog on the back seat. I guess 60s luggage was smaller than it is these days: there's no way I could fit most of my current luggage into that boot (there's a full-sized spare wheel in there too, you know).

The padded dashboard (rare in US cars of the time – just read Unsafe at Any Speed by Ralph Nader, published two years later for details) is just beautifully designed, appointed with light blue inserts and brushed aluminum. It’s funny that the picture of the dash doesn't show the rear-view mirror. It's mounted on the dash itself, on the top. 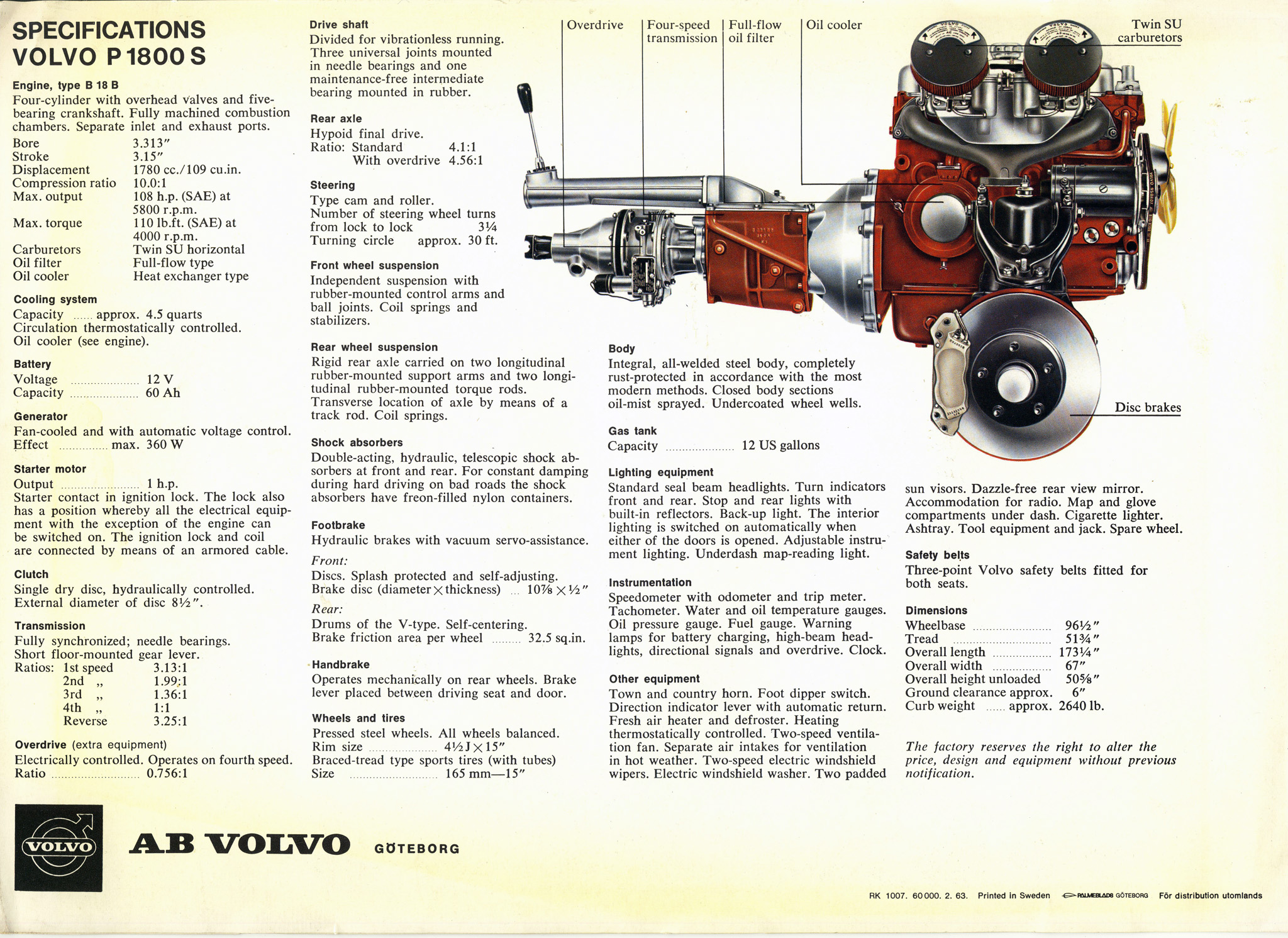 Here are the specifications of the car. The page includes print date: 2/1963. There are some great quotes in here that reflect the changes in car manufacturing and safety between then, 50 years ago, and now. Some of my faves: "Turn indicators front and rear", "The interior lighting is switched on automatically when either of the doors is opened", "Clock" (and it's notorious in the 1800S community for breaking down), "Two-speed electric windshield wipers".