This year, as part of the annual maintenance and service, Concours Cars noticed a gentle leak from the radiator. Not really a leak per se, more like weeping from one of the seams. What to do? I could have just left it, but there’s one thing that we battle with in Colorado Springs with a normally aspirated car apart from the sheer hell of tuning it for the altitude, and that’s the heat in the summer. Let’s put it like this, driving on the Interstate (or even around town come to that) in the mid-afternoon on a lovely sunny hot summer’s day, that water temperature gauge starts to go above the 212°F mark. Turn on the A/C and we’re talking approaching the 230°F mark at the top of the gauge. And with the road works we have on I25 at the moment, it’s stop and go sometimes, and I start getting really worried about the water blowing the radiator cap.

And having a slow weeping leak into the bargain? Not good.

So I pulled the trigger on a new radiator, this time with an overflow tank (the previous one did not have such a luxury). I considered maybe getting the old one repaired, but to be honest the difference in price wasn’t worth it. After a long-ish discussion, Mark at Concours persuaded me to also fit a shroud on the radiator to help with its cooling properties. He was fitting one to an Austin-Healey Bug-eyed Sprite because, like mine, it was prone to getting really hot in the summer.

Here are the results. 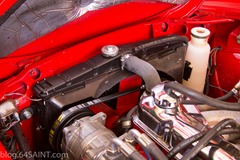 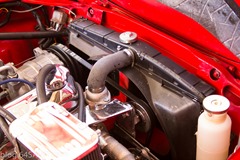 The fan blade is not a Volvo one, nor an OEM version, it’s from a BMW. The reason is, it’s an extremely light five-bladed plastic fan, which helps immeasurably in circulating the air through the radiator without a heavy load on the engine. It’s also thin enough to fit in the space (there’s not a lot of room in there between engine and radiator). Although it’s the correct shroud for the radiator, it had to be cut to fit around the A/C compressor (that’s the thing on the left being turned by the belt). There’s also an electric fan the other side of the radiator (a common enhancement in warm climes) – it came with the car – that has now been fitted with an “always on” switch so that, just like modern cars, the fan will continue to operate if the engine is switched off while very hot. On the top left corner of the radiator you can see the wires that lead to the temperature sensor for this functionality.

Before the changes, the water temperature would settle on 212°F on a steady drive. Now, even on a 100°F day, such a drive would only bring the radiator 15°F lower, to say 195°F. Turn on the A/C, and the temperature does creep up to the 212°F mark again. These are some incredible savings, temperature-wise. It’s also weird to park the car in the garage after a hot drive and have the electric fan just continuing to run for five minutes or so.

So, although an expensive bit of maintenance in the end, it’s taken a load of worry off my mind in this hot summer we’ve just had. The shroud was an excellent addition to be sure. I dare say I’m now driving the “coolest” Volvo 1800S in the Front Range.