New gauges for the Volvo 1800S

During the latter part of June and the beginning of July, while I was on business travel (and the wildfires threatened Colorado Springs), 64SAINT was at Concours Cars having its annual service and makeover. This time it was the gauges (tachometer, oil and water temperature, speedometer, fuel gauge, oil pressure, and clock) that needed to be refurbished or renovated and replaced. As there was also a split in the dashboard cover, that was replaced as well.

As an example why I got this done, here’s a photo of the speedo and tachometer taken by the seller when I bought the car two years ago: 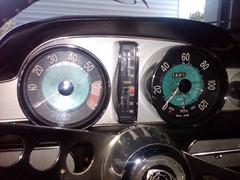 If you enlarge the photo and look carefully you can see the clear plastic is crazed on the speedo. Although it’s difficult to see in this particular photo because of the flash, the same was true of the tach. For those that know the early P1800 series, this photo also shows that the central vertical oil/water temperature gauges weren’t working either.

As part of the original deal, the seller provided spare gauges pulled from another car, so Concours Cars sent them off to Nisonger Instruments to be renovated or refurbished. They’re Smiths instruments experts, and, despite being a Swedish car, the Volvo has Smiths instruments out the wazoo. For the tach, they converted it to a modern electronic unit (still using the same needle, though), and the clock’s innards were taken out and replaced by a quartz movement (for Volvo owners, it is a rueful truism that the clocks on P1800s never worked beyond about a couple of years – they would seize up or burn out). The rest of the gauges were opened up and lubricated and the chrome and faces polished. We also decided that, as the speedo was going to be pulled, we should replace the speedo cable (the one that was in there was exhibiting the classic symptoms of being ready to break – the speedo needle would bounce once the engine was warmed up). 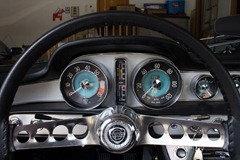 Marvelous. Just look at central temperature housing now. It’s just beautiful: the yellow water temp gauge, the blue oil temp gauge, and the red warning label all encased in this chrome box. Brilliant! The dash cover that was replaced was the top one (the split was just above the tach): it now looks and feels great. The speedo needle now stays nailed to the current speed; all bouncing has gone.

(Actually in this photo you can also see that the central hub on the steering wheel – it’s not the horn, no matter what you may assume – was crazed: I’ve now replaced it with a new one.)

All in all, a great bit of work. Of course, it’s lovely driving around in it at any time, but – even more – having a complete set of working gauges makes the whole experience much better. I can’t believe how much I missed the colors of those temperature gauges.

[A reprint of a post from my other blog.]