Last year, in 2011, I asked Concours Cars to get rid of the bloody awful exhaust system put on when the car was renovated and that was there when I bought it. You can see it here from the side of the car: 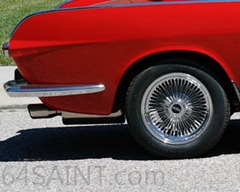 And this is what it looked like from the rear: 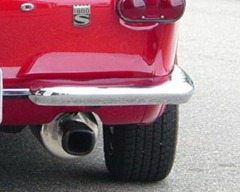 Frankly, a little too loud (like, very) and too “boy racer” for me.

So it was replaced with an OEM dual pipe exhaust to revert to the original look and very happy I was too. But there was a problem: the rear rubber hanger that held the exhaust on kept on breaking and disappearing. My exhaust after a month or so would wobble and look particularly daft from the back. I originally thought I’d managed to clip the exhaust on the ground somehow and the hanger broke. I paid extra special care in reversing out of our garage and onto the street (it’s at an appreciable angle), I no longer went on certain streets with “sleeping policemen” (as they’re known in England) or speed bumps. To no avail: the rubber hanger would just break off and vanish.

Finally, I took it in and the hanger was still attached but broken. This is what it looked like: 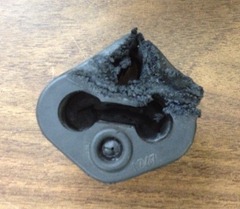 Yep, it had melted from the heat of the exhaust. Now, admittedly, I run the car “rich” to avoid stalling since we are at 6000 feet above sea level (and there’s no computerized fuel injection system), but we didn’t think that this would make the exhaust system hot enough to melt rubber.

After a bit of research Mark Weiner (the owner of Concours Cars) found that the rear hanger for an Audi TT is (a) the same size with the same spacing for the holes, and (b) is made of high-temperature-resistant silicone rubber (and (c) is green). So that’s what 64SAINT now has holding up the exhaust. Let’s see what German engineering can do on a Swedish car…