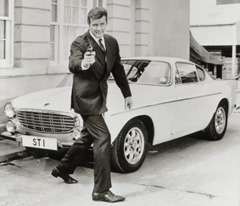 It had to happen sooner rather than later, I suppose, but I’ve just read the news that Roger Moore, erstwhile star of The Saint, the character that drove a certain model of Volvo, has died in Switzerland of a short battle with cancer. He was 89.

In essence, as I’ve reported here and elsewhere, it was the fact that Simon Templar drove a Volvo 1800S in that original TV series that made me fall in love with the car and encouraged me get one as soon as I could afford it. And now I’m on my second: one in England that I sold in ’97 after moving to the States, and one over here that I bought seven years ago.